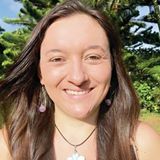 Staying true to the romantic theme in the air this month, authors Michael and Alison Miller show that when couples work together anything is possible. It’s not hard to see that the Millers are a talented and dynamic duo after reading their action adventure novel, “Fault Line,” which takes place at Hawaii Volcanoes National Park on the Big Island circa 2005.

In order to get the daunting task of writing and self-publishing their first book under their belt, Alison Miller says they’ve been “playing on our strengths as a team.”

“Mike is great with action sequences and I have some aptitude for developing characters,” she said.

Michael Miller explained it all began on a day in Volcano National Park.

“I thought: ‘this would be a great place for an action adventure.’ I’ve never seen any movies about the volcano there [Kilauea volcano] and I was into screenplay writing, I still am, and this was the third screenplay I wrote,” he said.

Like almost any great action adventure novel, explosives played a key role in the plot line.

“I wanted to get the volcano activated by having explosives planted in sensitive areas of the volcano, so I started consulting with a geologist friend of mine, Chuck Blay,” Michael explains.

“Fault Line” is chock full of intrigue and witty dialogue. The main characters are as daring, fit, and romantic as they are intelligent, which are things one might expect from a novel of this genre, and yet the novel delves deeper still. There too are strong, relatable themes portrayed through the complex relationships between the characters in the novel, which is sure to captivate readers.

Main characters Dr. Thomas and Susan Andrews are scientists who ultimately face the greatest challenge of their lives, attempting to aide the United States military to save hostages held captive at Hawaii Volcanoes National Park by terrorists. Fueled by a desire to avenge victims of a horrific historical atrocity, known as “No Gun Ri” bridge massacre during the Korean war, the terrorists threaten to detonate bombs within the fault line zones of Kilauea volcano. Detonating the bombs could trigger a catastrophic eruption, resulting in a “mega-tsunami” that would destroy Hawaii’s coastal regions and the U.S. West Coast.

As if navigating the ups and downs of marital life isn’t stressful enough, Tom and Sue Andrews are forced to aid in rescuing hostages and negotiating with the terrorists. Michael and Alison admit that they too had some hurdles to jump over, when it comes to working with your spouse. Alison admits, “There were a couple vulcan mind meld moments, but mostly co-creating is a process of communication, you have to give and take at times.”

The circumstances that bring characters together in Fault Line will keep readers laughing, crying, and page turning until the very end. Another added benefit to “Fault Line” is that a person is guaranteed to learn something new and fascinating about geology, volcanoes, American, world, and Hawaiian history, and more.

Alison shares that one of the best things about the book is meeting people when out selling and promoting in places like Princeville, Kapaa, and Hanapepe art walks.

“Personally, I’ve enjoyed selling books at the art walks because I meet the buyers,” she said.

The couple ways response has been positive and people say things like, “That’s awesome you wrote a book. And with your husband!’”

“Fault Line” is for sale at the Malelia’s at Hanalei Bay Resort, at North Shore General store in Princeville Shopping Center and Nani Moon Meadery in Kapaa on island. Copies of “Fault Line” are on sale on Maui as well.

Email the authors with our CONTACT FORM for more information about “Fault Line.”