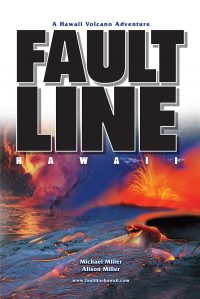 The terrorists plant high-explosives in Kilauea Volcano, the most active volcano in the world. They make their demands to the U.S. government, threatening to kill the hostages and ignite the explosives in the fault zones of the volcano. This will cause Kilauea to transform into a super volcano and create a mega-tsunami in the Pacific, which will devastate Hawaii coastal areas as well the U.S. West Coast.

The U.S. refuses to negotiate and instead calls on their Special Forces to intervene, along with the world’s top volcanologist, Dr. Thomas Andrews, to advise them with his in-depth knowledge of Kilauea. Joining him is his geologist wife and their apprentice.

Together, they must rescue the hostages and prevent the bombs from being detonated…

Disclaimer – Seller takes no responsibility for US mail delivery service. All orders are final and Fault Line offers no return policy.

All purchases are shipped at Book Rate via USPS, which can take 1 to 3 weeks for delivery.

“Together they must rescue the hostages and keep the bombs from detonating”!